North Korea (or DPRK) has continued to prove that the sanctions policy against its leadership is a failure. The DPRK has continued to subvert sanctions by earning hard currency through illegitimate means.  It essentially works as an organized crime syndicate. It is important for the international community, in particular the United Nations Security Council (UNSC), to think of ways to constructively engage the country so that it can effectively make a difference with regards to weapons proliferation and human rights and so that North Korea can turn away from using illicit channels to raise money. 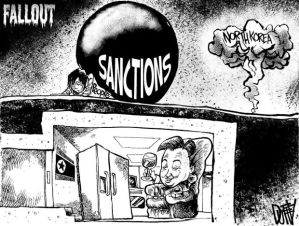 The North Korean quest to obtain nuclear weapons has been ongoing since the 1970’s. Kim il Sung, the “eternal president,” sought to develop a nuclear weapons program. Kim il Sung also perpetrated human rights violations. He used gulags and punished perpetrators for “counter-revolutionary” activities.[2] Former U.S. President Jimmy Carter decided it would be better to engage than to impose unilateral sanctions. Carter believed that by “derailing sanctions,” since sanctions were a “terrible idea,” North Korea and the U.S. could avoid a war.[3] Kim il Sung was scheduled to begin negotiations (despite disagreement within the DPRK) with Carter on freezing the nuclear weapons program and was about to hold his first summit with South Korea (or ROK) when he met an untimely death.[4]

Kim Jung-il, the “reclusive” son of Kim il Sung, was tapped to be his successor. The U.S. referred to North Korea under Kim Jung-il as a “Soprano state” because the dictator used various types of criminal activity to bring in “hard currency” to the country.[5] Research indicates that the criminal activity is mainly run through “Office #39” which is a “state apparatus.”[6] Sometimes Office #39 is also known as the Organization and Guidance Department (ODG).[7] Office #39 started and was directed by Kim Jung-il, prior to his father’s death.[8] Drug trafficking by North Korea began as early as the 1970’s. The drug market was diversified throughout the 80’s and 90’s so much that North Korea became a drug producer for organized criminal groups.[9]  Leadership has also participated and benefitted from wildlife trafficking.[10] In addition to building street credibility as a “criminal sovereign,”[11] severe famine[12] and other human rights abuses[13] also continued and were prevalent under Kim Jung-il. In 2008, in a Foreword to “Failure to Protect” former Prime Minister of Norway Bondevik, Professor and Nobel Laureate Elie Wiesel, and former President of the Czech Republic Havel stated:

“the government of North Korea had failed in its ‘responsibility to protect’ its own citizens from the most severe violations of international law and urged a robust international response through the UN Security Council. The evidence and analysis contained in the report was highly disturbing: North Korea allowed as many as one million people, and possibly many more, to die during its famine in the 1990s. Furthermore, North Korea imprisoned as many as 200,000 people without due process of law on arbitrary reasons in political prison camps.”[14]

Kim Jung-il succeeded in creating a family of long range rockets and conducted missile tests of the Taepo Dong I, beginning in 1998.[15] (The DPRK has insisted this was a satellite launch). This test occurred despite unilateral sanctions by the U.S. in 1992[16] and by the UNSC in 1993.[17]  Undeterred, Kim Jung-il stepped up his nuclear game with tests in 2006 and 2009,[18] whereby the UNSC responded with more sanctions. Resolution 1718 precluded countries from exporting military goods, froze assets and imposed travel bans for those engaged in the DPRK’s nuclear program, and allowed for inspection of cargo to prevent trafficking of nuclear material.[19] It did not preclude humanitarian assistance. In December 2011, the eccentric Kim Jung-il died,[20] leaving his son, “the great successor,”[21] Kim Jung-un, in power.

Like grandfather and father, the son has continued the legacy of human rights abuses, weapons proliferation, and illicit activity. These systemic and gross violations of personhood have become the norm under the ruling regime in the country.[22] The U.N. Commission of Inquiry (COI) noted in its 2014 Report on the DPRK that the criminalization of basic rights has amounted to a large number of street children, searching for food, but subjected to “arrest and forcible transfer.”[23] The COI  also noted, “violations of the right to food and to freedom of movement have resulted in women and girls becoming vulnerable to trafficking and increased engagement in transactional sex and prostitution.”[24] This problem is further compounded because “many women are trafficked by force or deception” from the DPRK into or within China for the purposes of exploitation in forced marriage or concubinage, or prostitution under coercive circumstances.”[25]

Kim Jung-un has become aggressive in the area of nuclear proliferation. The possibility of a fourth nuclear test looms on the horizon.[26] This is despite the 2013 tests which also brought about another round of sanctions.[27] Yet, even with more sanctions, the DPRK remains resolute in making progress in this arena,[28] potentially even preparing to export more nuclear technology to their Iranian and Syrian counterparts.[29] The young leader also continues to perpetuate a criminal state in order to maintain control over the population.[30]

The international community is continually learning that there is no easy way to deal with the DPRK. After the COI presented its findings to the U.N. Human Rights Council, North Korea called the report an “extremely dangerous political provocation.”[31] China also commented that the Report was “unnecessary criticism.”[32] The Human Rights Council subsequently passed a resolution (30 to 6, with 11 abstentions), calling upon the UNSC to hold DPRK leaders accountable for crimes against humanity and asked for the imposition of targeted sanctions.[33] North Korea’s reaction was dark. “No person on earth would be so stupid as to keep the door open to a gangster who is attacking with a sword.”[34]

The international community needs to consider new approaches in dealing with North Korea. Treating it like a pariah state has proven ineffective. [35] “Nobody has the right to declare a monopoly on understanding how to best understand or accelerate change in North Korea. Everything must be tried.”[36]

Military intervention on the peninsula will bring about horrible ramifications. How this scenario plays out has been portrayed by many political scientists and military strategists. Ignoring the problem has gotten the world nowhere. This means that constructive engagement is worth re-considering.[37] In 1998, the ROK called upon the U.S. to ease sanctions on North Korea. ROK President Kim Dae Jung stated that easing sanctions would be “more effective” in getting North Korea to be more “open” and to “liberalize.”[38] Kim Dae Jung was known for being one of the biggest proponents of engaging North Korea.[39] Unfortunately, the position of recent ROK leaders has (understandably) changed.

At one point in time, economic performance was considered to be a source of legitimacy because it continued control over the people.[40] There are projections that Kim Jung-un is interested in foreign investors to allow different projects to start in the country.[41] Constructive engagement has to move beyond the model of 6 party talks and paper shuffling. It will require that much more is put on the table for the 2.4 million people in North Korea who starve, are exploited, tortured, or are dying.[42]  Constructive engagement requires a focus on proliferation but a hyper focus on human rights and eliminating criminal activity. Engaging the regime in the Universal Periodic Review and implementing human rights monitoring mechanisms are positive steps.[43] Other  civil and corporate society actors are important to creating possible change. The UN Human Rights Council can also serve as an important mechanism for constructive engagement.

The UNSC needs to stop its robotic response of applying sanctions. Prioritizing the elimination of Office #39 in other countries in which it operates could give existing sanctions some strength.[44] Giving North Korea a legitimate alternative to its criminal economy could be the demise of Office #39. This could also be one of the keys to preventing human trafficking on the peninsula. It is also time to consider what other countries, beyond the UNSC, can take initiative to bring about dialogue. The US, ROK, and Japan are viewed as enemy #1; China is too entangled with the country to make any credible efforts to influence change. It may be that lifting sanctions off of other countries such as Cuba and Iran, could present alternative means to reaching the regime.

In reality, innocent people suffer because of sanctions, not the intended targets.[45] Some continue to believe that “smart” or “targeted” sanctions are enough to deter aggression and other kinds of behavior which threaten the international order. The current trajectory of events is enough to show that sanctions continue to be ineffective against North Korea’s ambitions.[46]

[22] Report by the Commission of Inquiry on North Korea (2014), available at:   http://www.ohchr.org/EN/HRBodies/HRC/CoIDPRK/Pages/ReportoftheCommissionofInquiryDPRK.aspx

[26] Associated Press, “North Korea Prepping for 4th nuclear test, South Korea says” May 8, 2014, available at: http://www.cbsnews.com/news/north-korea-prepping-for-4th-nuclear-test-south-korea-says/. Reports indicate that China has been trying to work bilaterally with North Korea in preventing the next set of tests and has warned the UNSC that further moves on their part could increase tensions. The UNSC will be further briefed on this issue on May 20.

[36] Christopher Green, “Criticising US Government grants for North Korea is ‘ignorant and insulting,’ The Guardian, May 14, 2014, available at: http://www.theguardian.com/world/2014/may/14/us-government-grants-north-korea-yes

[37] “The international community has for too long based its approach to North Korea – whether it be engage or isolate – on its own perceptions of the nation’s beliefs and motives. He insists North Korea does want to engage with the world, but says the west’s attempts to use “its own logic” to understand the regime’s moves has led it to “misread” the signals.” Enjoli Liston, “Jang Jin-sung: If anyone thinks North Korea is opening up, they are mistaken” The Guardian, May 7, 2014, available at: http://www.theguardian.com/world/2014/may/07/north-korea-defector-jang-jin-sung-pyongyang-book-dear-leader