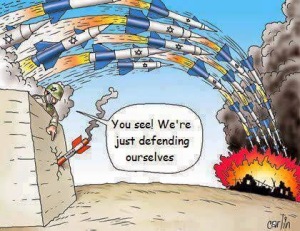 More than 2,000 Palestinians were killed in the 50-day conflict in July and August, about 70 percent of them civilians, according to the U.N. Seventy-one Israeli soldiers and civilians were killed in combat and in rocket and mortar strikes. [i]The chief Palestinian Authority negotiator, Saeb Erekat, claimed that 96 percent of Gazans killed in the summer’s Israel-Hamas conflict were civilians, reiterated PA President Mahmoud Abbas’s charge of Israeli “genocide,” and accused Israel of seeking to impose apartheid on the Palestinians.[ii]

Facing a United Nations investigation[iii] for possible war crimes committed during its recent military campaign in the Gaza Strip, Israel has launched probes of its own into suspected violations, hoping to ward off prosecution in international tribunals. The army itself is conducting its criminal investigations which seems flawed as the probes don’t cover the legality of orders that led to the alleged violations and is not an independent inquiry.[iv] It must be mentioned that the U.N. inquiry is focused on violations of international law in the Gaza Strip, suggesting that it will concentrate on the impact there of Israeli military actions. Under its mandate, the commission can recommend “accountability measures” to hold Israeli officials and military officers responsible for possible violations.

As a recognised state, Palestine is now considering signing up to the Rome Statute thereby becoming a member of the International Criminal Court (‘ICC’). Once Palestine is a member of the ICC it can request the ICC prosecutor investigate war crimes committed on its territory by Israel. As Israel has not signed up to the Rome statute of the ICC, Israel could not bring charges against Hamas for the rockets fired at Israeli civilians. An alternative route for the ICC to intervene is for the UN Security Council to refer the matter to the ICC. This definitely seems unlikely, given the allies of Israel are likely to block this referral. [v]

Under the Rome Statute outlining the powers of the ICC, it’s “complementary to national criminal jurisdictions” and can act only when states fail to investigate and prosecute alleged war crimes under their jurisdiction. In an effort to demonstrate its readiness to investigate possible violations, the Israeli army announced September 10 that it had appointed fact-finding teams headed by a major general to look into “exceptional incidents” during the Gaza war that might require criminal investigation. The army said 44 incidents had been referred to its “fact-finding mechanism” and more than 50 others had been identified for future referral. After review, the Israeli military advocate-general recommended criminal investigations into five cases, including a strike on a Gaza beach July 16 that killed four Palestinian boys and the shelling of a U.N. school housing war refugees July 24 in which 16 people were killed, the army said. The other criminal investigations are into the fatal shooting of a Palestinian woman, the reported beating of a Palestinian in custody and a theft of money by a soldier.[vi]

The Israeli military has targeted schools, hospitals and civilian homes in Gaza. Palestinian armed groups operating in Gaza launched more than a thousand rockets into Israel, with most aimed towards residential areas. These rocket attacks were indiscriminate and fired with the deliberate intention of killing or wounding civilians and destroying civilian infrastructure. As such they were war crimes, despite the fact that the inaccuracy of the rockets and the effectiveness of the Israeli “Iron Dome” defense system had kept Israeli civilian fatalities to a minimum. Responsibility for the rockets lay with Hamas, which is clearly the controlling authority in Gaza and is culpable for the attacks. While Israel had a right to defend itself against rockets raining down upon its cities, issues of proportionality and distinction (discriminating between civilian and military targets), appeared to have been repeatedly violated by the Israeli Defense Forces (IDF). International law required that the IDF strike at Hamas and other Palestinian armed groups in a way that intentionally minimized the loss of civilian life.[vii]

Under international humanitarian law, parties to an armed conflict must distinguish between military targets and civilians and civilian objects, and direct attacks only at the former. Indiscriminate and disproportionate attacks are prohibited. The parties must take necessary precautions in attack to minimize harm to civilians and civilian objects. They also must take all feasible precautions to protect civilians under their control from the effects of attacks. The distinction between military and civilian targets is central to international humanitarian law and must be adhered to regardless of where a conflict is occurring, or whom it is occurring between. With ongoing rocket attacks on Israel and unrelenting retaliatory airstrikes in densely populated parts of Gaza, both Hamas and the Israeli government appeared to be potentially violating the fundamental laws of war. Firing weapons which are incapable of making the distinction between combatant and civilian is itself criminal, so, depending on the evidence, the court could seek to prosecute Palestinians on account of the rockets being targeted at civilian areas, or failing to distinguish between military and civilian objectives. .[viii] Palestinians have located their military operations in civilian objects such as hospitals, as well as charges such as the use of human shields by Israeli soldiers[ix]

The Palestinians are now planning now to join 522 international agreements, conventions, protocols,” including those “paving the way to the International Criminal Court.” [x]If the matter reaches the ICC, it will have to deal not just with the crimes of individuals responsible for firing at civilians in hospitals, the demolition of civilian property, or the shooting of demonstrators, but also the long-term structural basis of the occupation as manifested in the transfer of Israeli citizen to occupied Palestinian territories and apartheid projects. [xi] The Prosecutor may examine the racist “systematic oppression” of Palestinians under Israeli occupation and the individuals held to be responsible for the murder or torture of Palestinians within such a context may then be prosecuted for the crime of apartheid as a crime against humanity. [xii]This case would be unprecedented as ICC has not yet tried anyone with the war crime of transfer of civilians into occupied territory as also apartheid, and therefore, the approach of the Prosecutor and the Court, may help expand the scope of law and justice for the civilians.

[i] The UN report carries a caveat with its figures: “Data on fatalities and destruction of property is consolidated by the Protection and Shelter clusters based on preliminary information, and is subject to change based on further verifications.” See Anthony Reuben, Caution needed with Gaza casualty figures, 11th August 2014, at http://www.bbc.com/news/world-middle-east-28688179

[vii] Both Israel and Hamas have a Responsibility to Protect Civilians, Justice In Conflict, July 25th , 2014, available at http://justiceinconflict.org/2014/07/25/both-israel-and-hamas-have-a-responsibility-to-protect-civilians/ ( Last accessed 28th September 2014)

[xi] Refer Report of the independent international fact-finding mission to investigate the implications of the Israeli settlements on the civil, political, economic, social and cultural rights of the Palestinian people throughout the Occupied Palestinian Territory, including East Jerusalem, A/HRC/22/63, 7th February 2013, available at http://www.ohchr.org/Documents/HRBodies/HRCouncil/RegularSession/Session22/A-HRC-22-63_en.pdf