Crimes Against Humanity, Truth and Reconciliation/TRC

The Death of Duvalier and Justice for Haiti

On October 4, 2014, Jean Claude Duvalier died of a heart attack. Widely known as “Baby Doc” he was given control over Haiti – at the age of 19- after his father passed away in 1971.[1]  His father, Francois Duvalier, was an educated physician. He was known as “Papa Doc.” Papa Doc instituted the “Duvalierist Revolution” where he declared himself president for life, destroyed any institution outside his reach or which criticized him, neutralized the army and had them replaced with the infamous secret police, the tonton makout.[2]

When Baby Doc was given control of the country he continued the terror his father had perpetrated through violent crackdowns, torture,[3] and starvation.  Between the father –son team Human Rights Watch estimates that 20,000-30,000 dissidents were killed.[4]

Baby Doc attempted to bring an economic revolution to Haiti. The small economic reform which took place during his dictatorship from 1971-1986 was short lived. In February 1986, Baby Doc and his family fled Haiti in a U.S. cargo plane for France. It is alleged that Duvalier “had stolen aid money and plundered state coffers.” Baby Doc was said to have pocketed as much as $800 million in his 15 years in office.”[5] Haiti filed a legal claim against the $4.6 million dollars held in Swiss Bank Accounts which in 2008 were almost released to the Duvalier family.[6] However, the monies which were going to be dispensed to charities were ordered by a Swiss Court in 2010 to be returned back to the Duvalier family.[7] 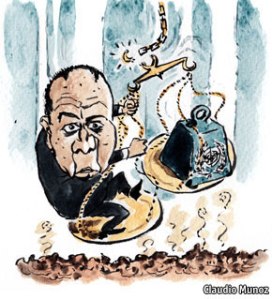 In 2011 when Duvalier returned to Haiti, the Preval government pursued charges of corruption, theft, torture, and murder. The Haitian court dismissed the charges of torture and murder due to the statute of limitations.[8]  In February 2014, a judicial panel reinstated charges of crimes against humanity against Duvalier.[9]  In March 2014, Duvalier’s attorneys filed an appeal arguing that Haiti did not “have a law that recognizes crimes against humanity” and if the charges were not dropped Haiti would risk a “civil war.”[10]

While Duvalier’s death means the end of a criminal trial, it does not mean that Haitians cannot have the justice they deserve. The momentum towards trying Duvalier for crimes against humanity should be used to create a truth commission. Prior to and after Duvalier’s exit, Haiti’s political system has gone through tumultuous times. A truth commission could potentially be the key needed for political and legal reform in Haiti.

Haiti already has experience with a truth commission. Former Haitian President Aristide, prompted by human rights advocates in and out of Haiti, set up the National Commission for Truth and Justice which examined crimes that took place under the three year de facto Cedras military government. Unfortunately, despite the effort at creating the National Commission, it did not effectively carry out its mandate and recommendations for reform were not properly instituted.[11]

A new commission with a robust mandate and carried out in an organized manner could be used to record historical narratives of the Duvalier era and other similar political eras in Haiti. It could serve as an important tool for inspiring political and legal reforms, in addition to addressing corruption. A new commission should have the active participation of those in rural areas and Haitian nationals who have fled Haiti. As Jean Claude Jean once explained to Priscilla Hayner, “in order to get to the truth, fight impunity, keep memory alive, and obtain justice, the main condition would be that the population participate in the research and production of the commission’s work.”[12]  As Haiti continues to seek justice on other issues, a truth commission at this juncture may bring needed closure to this horrific era in Haiti’s history.