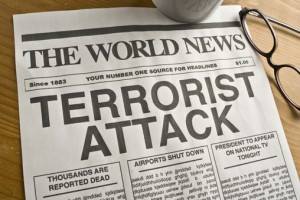 “Wars between states are confined to geographical areas and have a declared set of combatants, but terrorism can be conducted with relative ease across many national borders.”[1] It is widely evidenced, that terrorist violence is unpredictable, it can occur at anytime and anywhere. Anyone can use it and anyone can be its target. “It targets all ethnic groups, religions, nationalities and civilizations. It attacks humanity itself.” – stressed the Secretary-General of the United Nations, BAN Ki-moon approaching victims of terrorism acts. This unpredictability magnifies the effect of terrorism’s violence and, therefore, makes it difficult to combat.

The studies[2] of the victimization reveal that victims of terrorism acts suffer from a factor of an extreme helplessness which is caused by an unpredictability of a danger resulting in an acute distress among the citizens. This strong emotional shock is precisely caused by the unpredictability of a danger and as a psychologically damaging factor is easily adaptable to the manipulation by the terrorists.

This emotional state becomes even more severe when people are victimized in a foreign country. In such situations victims mainly find themselves at the mercy of the international instruments[3] attached to their victims’ rights. Yet attention for the rights of the cross-border victims of terrorism acts strongly depends on the development of terrorist activities, in particular attacks resulting in mass-victimization. The attacks in New York, London, Madrid, Bali can be recalled as illustration for such large-scale victimization. These examples also show, that increasingly, terrorists target places that are often frequented by tourists from abroad (e.g. tourist areas, capital cities). Therefore, such attacks also result in casualties and fatalities of cross-border victims.

It is evident, that the transborder nature of terrorism acts plays an important role providing assistance to the victims of such acts, including also the provisions of adequate compensation. In this regard, the United Nations Office on Drugs and Crime (hereinafter – UNODC) observed that: “Cross-border issues may add a layer of complexity to the measures required to protect victims’ access to justice and/or compensation.”[4] For example a location of the trial proceedings makes an important impact on the interests and involvement of a victim. From the proper access to justice, availability and evolvement of a victim depend also the chances of a successful trial as well as the proper application of the principle aut dedere aut judicare[5] (either extradite, or judge) in the cross-border framework.

In addition, transborder effects of terrorism cause an increasing necessity to establish jurisdictional links and create effective international cooperation, based on mutual legal assistance that on its behalf facilitate the functioning of victims’ support mechanisms beyond national boundaries. Therefore, the rights of victims of terrorism acts shall also encompass participation in criminal proceedings and receiving compensation. On the other hand, for the efficient implementation of compensation measures available according to the relevant domestic policies and programmes dedicated for the victims of terrorism acts there is a clear need for States to be aware of the various elements and procedures of compensation applicable in other States.

In this regard, when victims or their relatives face difficulties to follow proceedings that are taking place abroad, States would have to make additional efforts to extend the support, which is usually available on domestic level, to victims residing abroad or to victims residing in their territory who have been victims of ofences abroad. As example, the experience of foreign victims of the bombings in Indonesia in 2004 illustrates some of the cross-border challenges faced. “While under the Indonesian framework regarding treatment of victims and witnesses, there was no obstacle for foreign victims to seek restitution, one difficulty encountered by a foreign victim that sought medical treatment in a third country was that the legislation of neither Indonesia nor the country of nationality of the victim provided for coverage in those circumstances.”[6]

In addition, “many OSCE[8] participating States also provide for compensation to victims who are either citizens or residents of their country when they are victimized abroad.”[9] Therefore, in general, most States do not differentiate between nationals and non-nationals on a specific framework of assistance for victims and witnesses. However, to foster the assistance in such framework “it could be of great importance to collect information on national focal points for support to victims of acts of terrorism, to make this information readily available to victims and their families, and to foreign services.”[10] This could prove a minimal but crucial element to facilitate rapid responses to terrorist acts, especially in countries which may have different regulations within the same legal order, e.g., the provinces of Australia and Canada.

Another important issue related to the tarnsborder effect of the acts of terrorism is the flexible nature of terrorism itself. It is often distinguished that: “Within such a framework of globalization, terrorism does not only appear as a global threat, it comes as a chimera as organized crime, illegal immigration, money laundering and corruption. The second aspect of criminology’s new role – it’s partnership with counter-terrorism on the battlefield stems from that chimera.”[11] It can be also added that: “Transnational crime is […] generally conducted by private parties that states are working to suppress. Terrorists, though they may at times receive illicit support from sympathetic states, are usually private persons who engage in violence that is directed at making their government or a neighboring government act or not act in a certain way.”[12]

The development of the crime itself, show that terrorism increasingly becomes a part of a crime network encompassing organized crime, corruption and money laundering. In such case, the challenge to support victims of the terrorism lies in the linkage between the conception of terrorism acts and these other crimes. This challenge becomes mostly struggling when it is addressed by the lawmaker. Such crime “[…] offends the international order and […] nearly all states are concerned with the crime and must work together to suppress it.”[13]

Today, “the scourge of terrorism has become world-wide. It throws a complicated set of challenges varying in scope and scale to different state governments which often grope for appropriate means to respond.”[14] Thus, terrorism will continue to be a difficult and persistent feature of international violence. Therefore, international cooperation based on mutual trust and coordinated international efforts are necessary to ensure effective transnational proceedings and the protection of terrorism victims’ rights beyond the borders.

[3] This was very apparent in the drafting of the 2001 EU Framework Decision on the Standing of Victims in Criminal Proceedings, where in fact the specific problems of ‘foreign’ victims were the main driving force for European competence in the area of the protection of victims of crime.

[4] United Nations Office on Drugs and Crime, The Criminal Justice Response to Support Victims of Acts of Terrorism (2011), p. 4, para. 10.

[5] The principle of aut tradere, aut judicare (either extradite, or judge) concerning perpetrators of terrorist acts, which means that the requested State must either extradite the alleged offender, or bring the case to national courts for legal proceedings. UNODC, Guide for the Legislative Incorporation of the and Implementation of the Universal Instruments Against Terrorism, p. 85.

[8] Organization for Security and Cooperation in Europe.

[9] Rianne Letschert, Antony Pemberton, Addressing the Needs of Victims of Terrorism in the OSCE Region, Security and Human Rights no. 4 (2008), p. 305.

One thought on “Terrorism: Victims Beyond Borders”